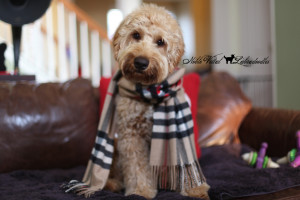 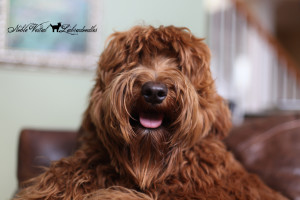 Finally!!! Congratulations to all of our families! I look forward to meeting you all on the 18th!   Please make sure that you order food NOW! Your puppy is eating the grain free all stages formula of Lifes Abundance, you will not find this food in the store and your puppy should continue on the same diet during the first year of life. Your mandatory reading is on the way, be sure to stay current with your reading.

February 4, 2017
Ember's babies have mastered sleeping in their crates, ringing the bell and being adorable! We go to the vet tomorrow for our last checkup before we go home.

Well it is official.. Ember's puppies definitely like food! Ember is still eager to nurse her puppies but we try to encourage her to let the puppies eat real food and then for her to just jump in to play with them instead of nurse them.  She is a great momma and still feels that it is her duty to provide.. she is not at all shy about swiping the gluten free donuts or a sandwich and sharing it with her babies.  The puppies have started sleeping in crates of a night and are going outside on little adventures. Puppies were bathed, had their nails trimmed and received their distemper and adenovirus vaccines this week.  We will do assignments after their next visit on the 6th.

Puppies have can't decide if they like food or the milk bar more and since Ember is such a willing momma they get both! They have potty trained quickly to their potty station. They had their nails trimmed this week and were moved to the kitchen for more action.

Ember's puppies are three weeks old, they are toddling around and noticing the world beyond their mother. We have moved them into a slightly larger area this week so that they had enough room for a potty station. They learned to use it the first day it was given to them!  The puppies had their nails trimmed today.

It is a great feeling to pickup Ember's puppies and feel how heavy they are! Eyes are open!  The puppies still do not have full vision and won't even at 8 weeks of age.  They can tell by smell if I or someone else has walked into the room.  They are moving on their own and actually standing up and taking a few steps.

December 26, 2016
I can't even begin to describe the incredible sadness that our family has experienced this weekend. The heartbreak and hours upon hours of lost sleep while tending to Ember's babies have left us emotionally and physically spent. These hours and days are some of the hardest that we face and know can happen with any litter but it never easy. We lost four of Ember's babies during this past weekend. Remembering that life is delicate is hard to swallow. The remaining puppies are normal in every other way.  Puppies rely solely on Ember for warmth, nourishment and sanitary needs. A puppy's body temperature must be at least 85 degrees in order to digest their mother's milk.