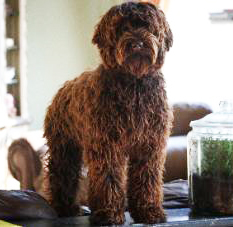 The Labradoodle was bred over 20 years ago in the 80’s in Australia by Wally Conran of the Royal Guide Dogs in Victoria, Australia. The breed was developed by the intentional breeding of a Labrador Retriever and a Standard Poodle. This mixed breeding was done after several years of research to find an allergy friendly guide dog for a family in Hawaii. Originally several samples of Poodle fur were sent to the family. Unfortunately they all caused allergic reactions to the husband of a blind woman. That is when the idea of breeding this mix breed came to fruition.

The Australian Labradoodles Temperament and Soundness are the two KEY elements in a good family companion; they must not be sacrificed for any reason.