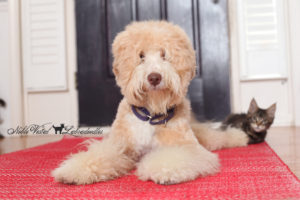 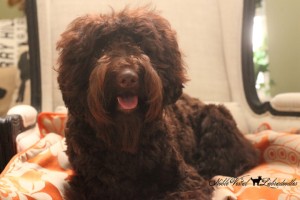 May 13, 2017
How do I love thee? Let me count the ways..
To be honest there are too many to list all of the reasons why I love Boo's puppies. Potty trained to their potty station, sleeping through the night in their crates, love attention and about the most smooshable puppies I have ever had.

We will be doing evaluations this upcoming week, puppies and Boo will be spayed on Friday and final assignments will be made by next weekend. Right now my puppy has an underbite and will be released as a pet, I am not sure that I will retain the 2nd pick girl. This means that we may have a puppy available. We will consider families with completed applications.

The puppies have moved to a larger area with toys that help build confidence and coordination (slide, tunnel, wobble board). They are loving life! Eating, playing and pooping with a vengeance!

April 29, 2017
Boo's babies are five weeks old and loving their new larger space. They started eating solid food, are using their potty station successfully, got bathed this week, nails trimmed and lots of snuggles. Who could resist snuggling these chunky fur balls.

April 22, 2017
Oh it is so hard being so cute. Boo's puppies are four weeks old and want to eat real food so bad! They had their nails trimmed and are enjoying cuddles.

April 14, 2017
Some Bunny Loves Chocolate. Boo's babies are three weeks. Eating and sleeping is still what they do best.

April 01, 2017
Boo's puppies have gained several ounces this week which is great. Like always her puppies are F A T and happy. Puppies at this age primarily eat, sleep, poop and grow.. growing takes most of their energy.