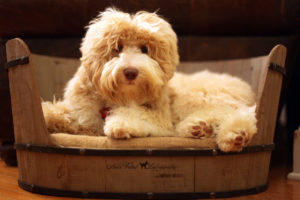 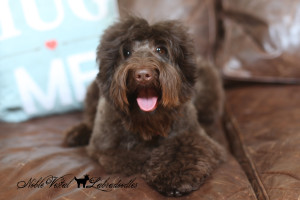 Finally!!! Congratulations to all of our families! I look forward to meeting you all on the 8th!   Please make sure that you order food NOW! Your puppy is eating the grain free all stages formula of Lifes Abundance, you will not find this food in the store and your puppy should continue on the same diet during the first year of life. Your mandatory reading is on the way, be sure to stay current with your reading.

The puppies have mastered their environment and have moved to the kitchen for a larger area and outings to see the world outside the house. Muppet stays with them at all times and works hard to corral them. The puppies were vaccines and had their nails trimmed. So far they are doing great and are very happy puppies.

They are eating solids and going potty on the potty station 100%. They have learned to climb the slide and are starting to pull toys around that are bigger than they are. The puppies are confident, love to give kisses and their tails wag endlessly! They puppies were dewormed this week and had their nails trimmed.

The Muppies have almost skipped an entire developmental stage! They are trying to eat food with some success and have even started playing with each other's tails and ears. They had their nails trimmed this week and were brushed with a soft brush.