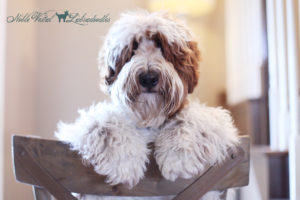 November 26, 2017
When I want to keep every single puppy in a litter it makes it so difficult to do assignments...
Finally the moment several families have been waiting for.
L-R: Baby Girl 1, Baby Girl 2, Baby Girl 3, Baby Boy 1 and Baby Boy 2.
Baby Girl 1- BaDinka Gordon Noblesville IN
Baby Girl 2- Piper Levinsky Chicago IL 2nd NVL Puppy!!!
Baby Girl 3- NVL Prospect Guardian Home Needed
Baby Boy 1- Oliver Klocker Vernon Hills IL
Baby Boy 2- Pike Family Broadview Heights OH 2nd NVL Puppy!!!
I am so incredibly excited for all of you! Please order food today so that you have it when you get home with your puppy. They eat the grain free all stages Life's Abundance You will not find this food at the store and your puppy should eat the same food during the first year of his life while his GI system matures. They also love their bully sticks.

The Muppet babies are rough and tumble... They have ventured outside with me for a morning walk and got wet from the grass (it poured rain all day yesterday).

They might be little but they are big lovers! They are sleeping in their crates of a night and doing morning walks with us.

Puppies go to the vet later this week, we will do assignments shortly after their vet visit.

November 11, 2017
The Muppet babies are chowing down on real food, have mastered climbing on their slide, playing in the ball pit and getting though the tunnel. They are so small but they don't know it!

And I still don't know if I am only keeping one or two.. I love the entire litter. If I don't keep two.. one will be available.

November 04, 2017
Muppet's puppies are now in week 4 and the puppies are having a lot of fun. They are learning to climb on the steps of their slide, to navigate the tunnel and are picking up toys in attempt to figure them out.

They found the water bowl and have mastered drinking but they often walk through the full bowl of water without even noticing! Keeping them dry is a full time job. They are eating solids- (Life's Abundance soaked in goats milk or bone broth) and love food!

We are trimming nails, feeling the inside of their mouth, massaging paws, ears and tails regularly. The puppies are all showing great interest in human relationships (meaning they are all attracted to people that walk in the room).

I can't decide but I may be retaining two puppies from this litter and officially closing the reservation list. I am having a difficult time deciding who I like best.

October 28, 2017
The puppies have started using their potty station and are starting to romp (move fast). They are big kissers.
Our potty training protocol allows our puppies to be raised in a clean area which later translates into good potty behaviors as puppies move into your home. Puppies who are raised in a dirty area where they urinate and defecate where they sleep are much harder to potty train, many do not care if have to sleep in their own waste.

October 21, 2017
Eyes are open!  The puppies still do not have full vision and won't even at 8 weeks of age.  They can tell by smell if I or someone else has walked into the room.  They are moving on their own and actually standing up and taking a few steps.

October 14, 2017
I could watch them sleep all day long. They are so peaceful. Muppet is a great momma.

Did you know? That at one week of age a puppy cannot hear or see? Their greatest sense is their sense of smell and touch. They must stay warm, fed and are cleaned by their mother. At this stage they eat, sleep and poop and none of those things happen without the aid of Muppet.