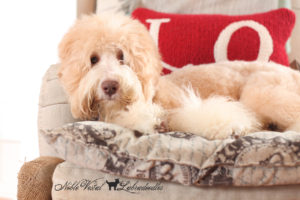 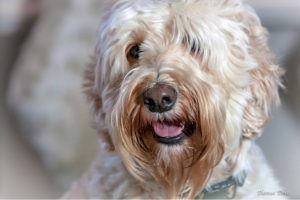 Congratulations to our Wheatie puppy families! I absolutely adore everything about every single puppy in this litter! You are all getting amazing puppies.
L-R: Baby Girl 1, Baby Girl 2, Baby Boy 3, Baby Boy 4, Baby Boy 5

I am so incredibly excited for all of you! Please order food today so that you have it when you get home with your puppy. They eat the grain free all stages Life's Abundance (< link to food). You will not find this food at the store and your puppy should eat the same food during the first year of his life while his GI system matures.

August 19, 2017
Eating big dog food, climbing two steps, mastering the wobble board, carpet, tile, wood, concrete, grass, gravel, playing in the pool, chasing the big dogs, nails trimmed, baths, vaccines. That is what we have been up to this week.

Wheatie's babies have their final vet checkup this upcoming Friday, assignments will follow soon after.

August 13, 2017
Wheatie's puppies have started sleeping in crates, going outside in the morning and several times during the day to go potty and to play in the grass.

What In The World?! I think they grew up over night! They went from ignoring food to eating food! They are playing with toys and bouncing around.

We are four weeks old, have mastered the potty station, are developing an appetite for real food and want to explore!