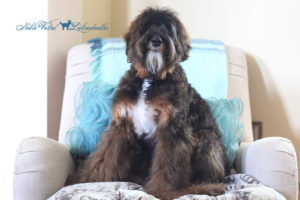 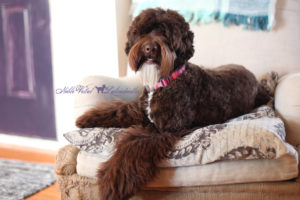 November 4, 2018
Congratulations to our Dilly & Hammer puppy families! I can't wait to meet you all and see some of you again!!!
L-R: Pink Girl, Lavender Girl, Yellow Girl, Green Girl, Teal Girl, Red Boy
Pink Girl- Gallina Family Carmel IN 2nd NVL Puppy!
Lavender Girl- McGreevy Family Lake Forest IL 2nd NVL Puppy!
Yellow Girl- McCorkle Family Eugene OR 2nd NVL Puppy!
Green Girl- NVL Prospect
Teal Girl- Kohn Family Cincinnati OH
Red Boy- Reagan Felts Nashville TN 3rd NVL Puppy!
I am so excited for each of you! Please let me know your puppy's name as soon as you know what you are going to name her! Order food today so that you have it when you get home with your puppy. They eat the grain free all stages Life's Abundance You will not find this food at the store and your puppy should eat the same food during the first year of his life while his GI system matures. They also love their bully sticks.

October 27, 2018
Dilly babies are ready to take over the world! They run, they play, they have mastered their potty station and balance toys. Each puppy is so uniquely adorable and sweeter than they are cute!  There isn't much else to say about them since they have mastered puppyhood!

October 20, 2018
Ooohhh super sweetness.. Dilly's babies are happy and so silly! I can guaranty their will be more Dilly puppies in our future!

October 14, 2018
Potty Station Training success! Dilly's babies catch on so fast! They are trying to eat Dilly's food and learning to play with one another. They are very social and happy babies.. they befriended a maine coon kitten this week who thinks she is a puppy! I keep finding the kitten in with Dilly's puppies. The puppies love the kitten, I am not sure if Dilly does or not.

October 7, 2018
Dilly's babies are mobile and have learned to use a potty station. Learning to keep their area sanitary is a big part of potty training your future puppies. Puppies who are raised in a dirty environment are harder to potty train.  The babies still require constant care from Dilly and she really doesn't mind.. she loves her babies.

September 29, 2018
Their eyes have just opened but they still do not have full vision and won't even at 8 weeks of age.  They can tell by smell if I or someone else has walked into the room.  They are moving on their own and actually standing up and taking a few steps.

September 22, 2018
Ohhh Dilly is such a good momma.. her puppies are fat and happy. They have doubled their birth weight and doing great. We trimmed their nails this week.