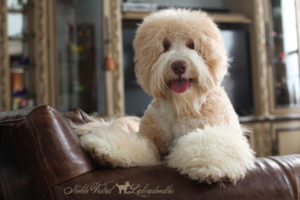 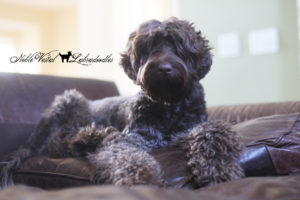 September 1, 2018
Well here we go.. I am always super anxious on puppy assignment weekend. I hope every family loves their puppy as much as I love them.

August 25, 2018
Kanga's babies are sleeping in their crates, going outside several times a day on field trips to explore the fields. I love watching them run and play in the grass but it is so fun to watch them hunt for grasshoppers! Their favorite toys are their Go Dog dinosaurs and Busy Buddy jacks. The puppies go to the vet this upcoming week for their final checkup and physical, we will do assignments shortly after.

August 16, 2018
It is far to rainy to take our normal outdoor photos for week six.. sorry. The puppies are enjoying romping in the grass, even in the rain. They are sleeping in their crates of a night and take a nap daily in their crate.  They are incredibly smooshy and love to snuggle.

August 10, 2018
Kanga's puppies eat like professional wrestlers! Anything and everything that they can get into their mouths they will eat!

They are learning to navigate their new slide and tunnel and love to roll around wrestling with one another. They are fun to watch.. video coming soon. ; )

August 4, 2018
Kanga's babies may look chubby and slow but don't let them fool you! They are on the move!

They have decided that it is time to run and explore. Picture day just got kicked up a notch with all of them deciding that they wanted to jump off the bed and run in different directions to play with the rest of our crew!
They got their nails trimmed this week and were introduced to softened food, they still prefer the milk bar and based on their rolls they are doing great as is.

Kanga's puppies have grown so much this past week that they are now in big puppy collars and going potty on their potty station. These are great mile stone markers for puppies.. we are right on track with development.

Oh baby oh baby... Kanga's sweet babies are little chubbers. Darling little chubbers who have opened their eyes! Their eyes have just opened but they still do not have full vision and won't even at 8 weeks of age.  They can tell by smell if I or someone else has walked into the room.  They are moving on their own and actually standing up and taking a few steps.

Ohh Kanga babies are too precious for words. They are like little dim sum dumplings. So round and fat. They are happy little darlings with no complaints.

Their eyes and ears are sealed shut as they continue to develop after birth. Their greatest sense is their sense of smell and touch. They seek out their mother by smelling the surrounding area and moving toward the warmth. Puppies require the constant care of their mother until they are at least three weeks old

The puppies had their nails trimmed this week.