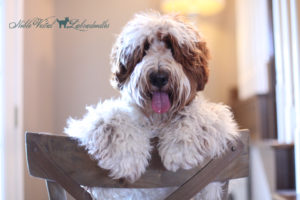 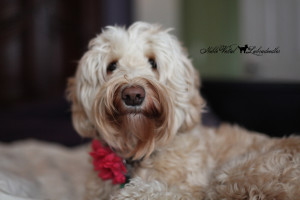 June 24, 2018
Congratulations to our Wheatie puppy families. I am sorry you had to wait for this announcement I know you have been excited to find out who your new family members are.

As soon as you know your puppy's name please let me know so that we can help your puppy get used to its new name.

June 16, 2018
I can't believe how fast time passes. From the moment they are born until they go home it is a race. Raising them in a harmonious environment so that mom stays happy and does the best job that she can, handling them daily to desensitize them to stressors, potty training them to a potty station to help them keep their area clean, providing proper nutrition while they are weaning, providing a socially rich environment so that they learn new skills that will help them as they transition to their new homes, exploring new territory and becoming big confident puppies. Our last vet visit is this upcoming week and then preparing to join their families. I love this process and hope that you are all enjoying it too!

Wheatie's babies are loving their slide and new toys. They got their parvo vaccine, their nails trimmed and combed today! They are officially big kids now that they have decided that going outside to explore and play is so much fun.  They have learned to climb the steps on their own, love chasing the kids in the yard and following along as we do yard work. The puppies have started sleeping in their crates and have grown and developed into little dogs. It is amazing how quickly they grow!

June 2, 2018
These babies are still so chill that I can get them all to stay on their backs to take at least 20 shots to get this one shot. I might have to keep them all for myself. 100% potty station trained, starting to want to eat real food but they still think Wheatie's milk is the best. They are sleeping without their momma and starting to explore there larger area. Using a potty station allows us to maintain the puppies in a clean environment, puppies who have been raised in a clean area potty train quickly in their new homes because that is what they know. This is a win-win for us and our new families!

May 26, 2018
Good heavens.. You can say the babies are well fed! At three weeks of age collectively they weigh about 21 lbs!

They have moved into their new space decked out with a bed, potty stations, toys for exploration, lots of sunlight and new sights, sounds and smells.

They are so fat that we have had to put bigger collars on them earlier this week!

May 19, 2018
The puppies eyes are just now opening but even after they are fully open the puppies still won't have full vision and won't even at 8 weeks of age. They can tell by smell if I or someone else has walked into the room. They are moving on their own and actually standing up and taking a few steps.

5. Thermal stimulation - use a damp towel that has been cooled in a refrigerator for at least five minutes. Place the pup on the towel, feet down. Do not restrain it from moving. Time of stimulation 3-5 seconds