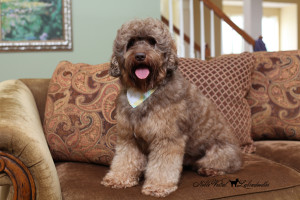 July 14, 2019
I am so excited for all of my Ollie & Buzz families! This is a bitter sweet litter for us as Ollie has officially retired.

L-R: Pink S Girl, Red Boy, Lavender Boy, Yellow Boy, Green Boy, Blue Boy
Pink S Girl- Noble Vestal Prospect Guardian Home Needed
Red Boy- Long Family Carrollton TX *2nd NVL Puppy!
Lavender Boy- Toby Torres Leesburg VA
Yellow Boy- Kaplan Family New York NY
Green Boy- Newman Family Glenview IL
Blue Boy- Bentley Cailteux Lewis Center OH
I am so incredibly excited for you all!!! Please let me know your puppy's name by Tuesday! Order food today so that you have it when you get home with your puppy. They eat the grain free all stages Life's Abundance You will not find this food at the store and your puppy should eat the same food during the first year of his life while his GI system matures. They also love their bully sticks. Puppy Pick Up Is For Essential Adults Only! Please respect that other families are on a tight schedule.

July 6, 2019
Ollie's puppies are about the calmest sweetest babies ever. This is a bitter sweet since it is Ollie's last litter. I think I need to keep them all.

Each one is sweeter and easier than the one before it. They have started sleeping in their crates, are eating 3 solid meals a day, Ollie spends her time rolling in the grass with the babies and getting them to chase her! It is sweet to watch.

June 30, 2019
What a huge difference a week makes! They are seriously little dogs now. They decided they were ready to eat real food and have started eating a few small meals of the grain free All Stages version of Life's Abundance. Right now I am adding a little water just to help keep the food in the bowl otherwise they enthusiastically push it out of the bowl while they are eating. They are sleeping without Ollie as she has decided that would prefer to sleep on my bed. The puppies have learned to climbs the small steps of their play yard and really enjoying playing with their toys.

June 22, 2019
Ollie's babies have started noticing the world beyond their area. They know when I come in the front door, when someone walks past my office about 10 feet away from them, they even know when the person has food.. their little noses go to the air as they smell what just passed by. We switch toys out of their area a few times a day so that they are constantly stimulated with new things to explore and do. This keeps them mentally sharp and engaged. The babies are really buzzing along and hitting all of their developmental markers right now. I love watching them grow. They are easy babies who never complain and are very content.

June 15, 2019
Ollie & Buzz babies are in week 3- They have started to really move around this week, they are exploring an trying to eat Ollie's food but are no where near ready to eat solids or even softened food at this stage. The babies having been playing and mouthing each others faces, ears and tails. This is a sweet stage.

June 5, 2019
Their eyes have just opened but they still do not have full vision and won't even at 8 weeks of age.  They can tell by smell if I or someone else has walked into the room.  They are moving on their own and actually standing up and taking a few steps.