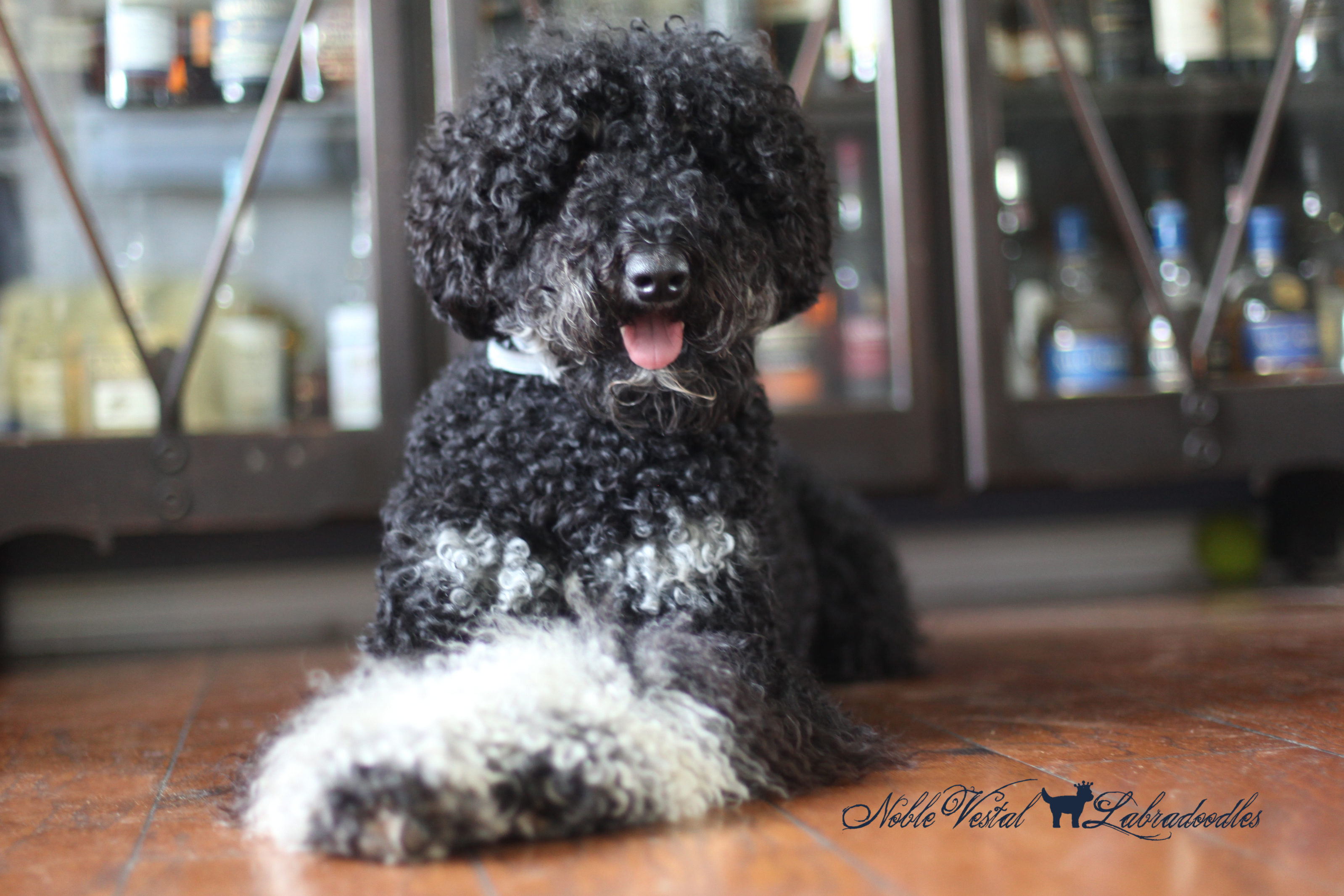 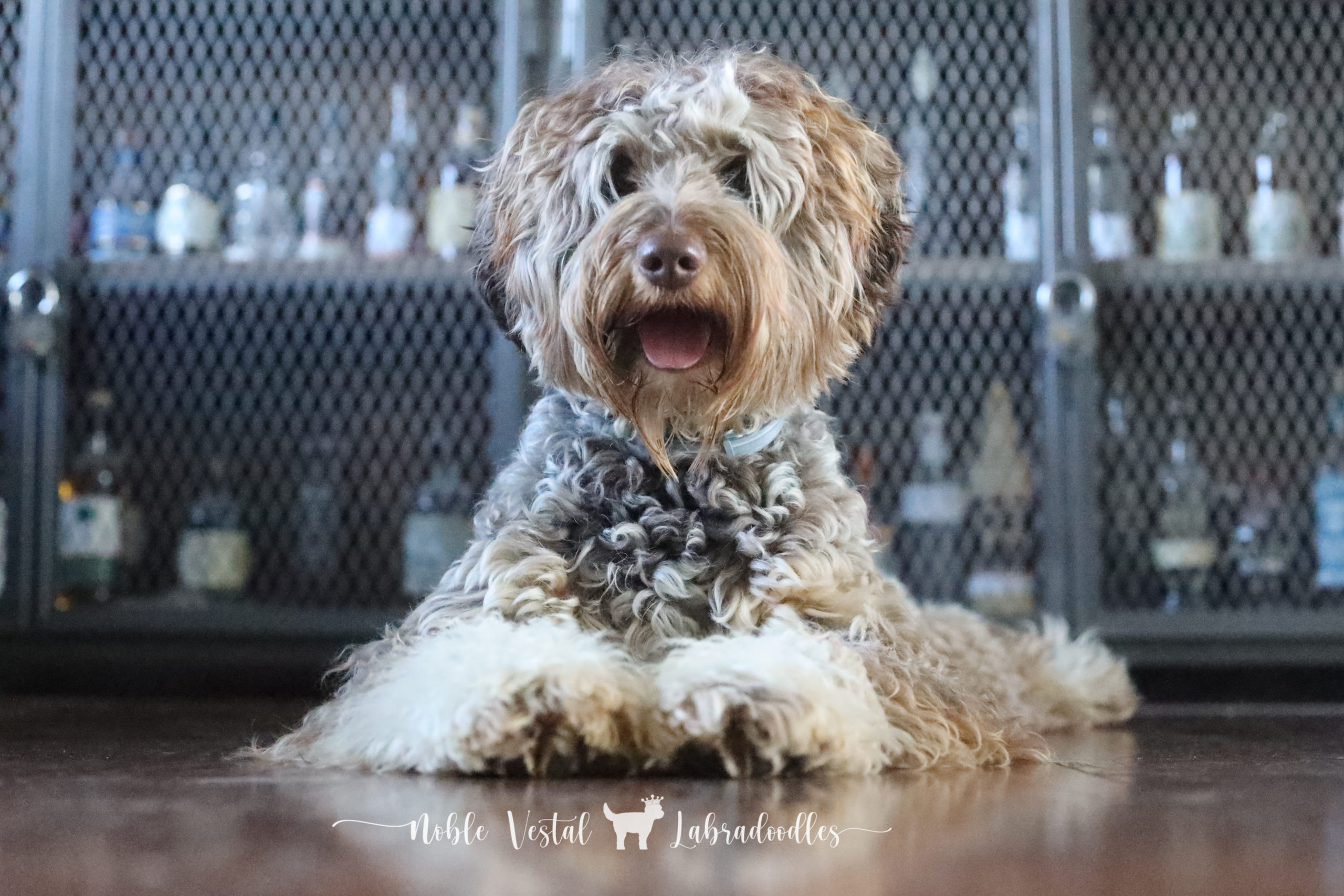 August 6, 2022
There is so much love right here that it is hard to contain. He has grown so much! His goal every day is to kill his GoDog dinosaurs and dragons because they crinkle and squeak, to him they must be killed so that he can nap on them...they make a comfortable pillow after a hard play session. He takes a mid-afternoon nap in his crate and is sleeping through the night too.  Weekly pupdates will officially end this week. Zeke is staying for training and as much as we would love to update weekly it is often difficult because we get super busy and are on the road a lot during training sessions.  Updates will now be posted to Facebook or Instagram.

July 23, 2022
Zeke is finally a little dog!  Every morning I open his crate and he runs, high stepping it with her front paws out. Babe refuses to sleep anywhere except where Zeke is.  Zeke is eating his food like a champ and nursing a few times a day. Zeke spends most of his day playing with Posey's puppies or toddling around my office. He has figured out the slide, wobble board and toys.  He has really started to change and blossom this week. I love watching them grow.

July 16, 2022
The sweet hunk of love is four weeks old and becoming independent. He has been spending a few hours a day with Posey's puppies (Babe lays nearby to supervise) so that he can learn how to interact with other puppies. He does very well with them and will even nap cuddled up next to Posie's puppies.  Our main maine coon loves puppies and when Babe isn't around (Babe is cat obsessed, not in a good way) she has also taken to socializing the baby. They eat together and then clean each other's faces. It is sweet to watch.  He started trying to eat Babe's food last week so we started giving him softened PawTree Turkey & Sweet food and he loves it!

July 9, 2022
The puppy is up and on the move! If he isn't sleeping he is going someplace and Babe is often two steps behind.  We are keeping the puppy on surfaces with traction (puppy pads) vs allowing it to walk on tile and hardwoods at this time to protect her joints as they are maturing. Because there is only one puppy he also has access to unlimited milk, we are starting to reduce access to Babe's milk by having her wear a shirt a few hours every day, we don't want the puppy to get to heavy or grow faster than he should.  Overall he is doing very well and hitting key mile markers. He has started using the potty station which helps keep their bedding clean. This is a big help and will help her potty train faster as he transitions to his home.

July 2, 2022
The puppy's eyes are just starting to open but it still does not have full vision and won't even at 8 weeks of age. The puppy can tell by smell if I or someone else has walked into the room. The puppy is moving on its own and actually standing up and taking a few steps.  This week the puppy has continued to be handled daily and received Bio-Senor feedback which helps them build healthy immune systems, improved cardiovascular performance, stronger adrenal glands, more tolerance to stress, and greater resistance to disease. The U.S. Military in their canine program developed a method that still serves as a guide to what works. In an effort to improve the performance of dogs used for military purposes, a program called "Bio Sensor" was developed. Later, it became known to the public as the "Super Dog" Program. Based on years of research, the military learned that early neurological stimulation exercises could have important and lasting effects. Their studies confirmed that there are specific time periods early in life when neurological stimulation has optimum results. The first period involves a window of time that begins on the third day of life and lasts until the sixteenth day. It is believed that because this interval of time is a period of rapid neurological growth and development, and therefore is of great importance to the individual. The "Bio Sensor" program was also concerned with early neurological stimulation in order to give the dog a superior advantage. Its development utilized six exercises, which were designed to stimulate the neurological system. Each workout involved handling puppies once each day. The workouts required handling them one at a time while performing a series of five exercises. Listed in nor order of preference the handler starts with one put and stimulates it using each of the five exercises. The handler completes the series from beginning to end before starting with the next pup. The handling of each pup once per day involves the following exercises:

June 25, 2022
Did you know that dogs are an altricial species they are born before they are fully developed in contrast to precocial species who can stand and walk around within hours of birth?