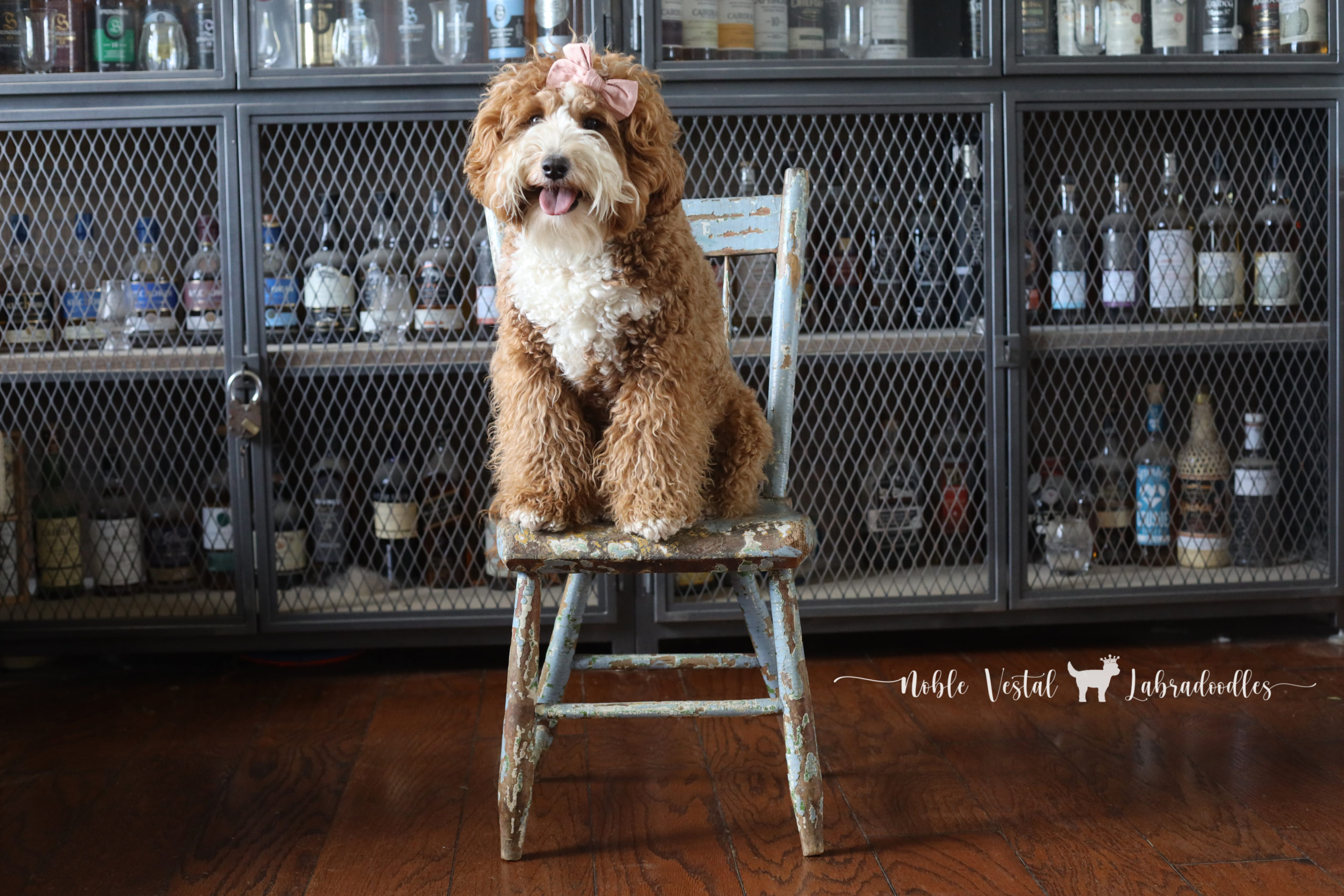 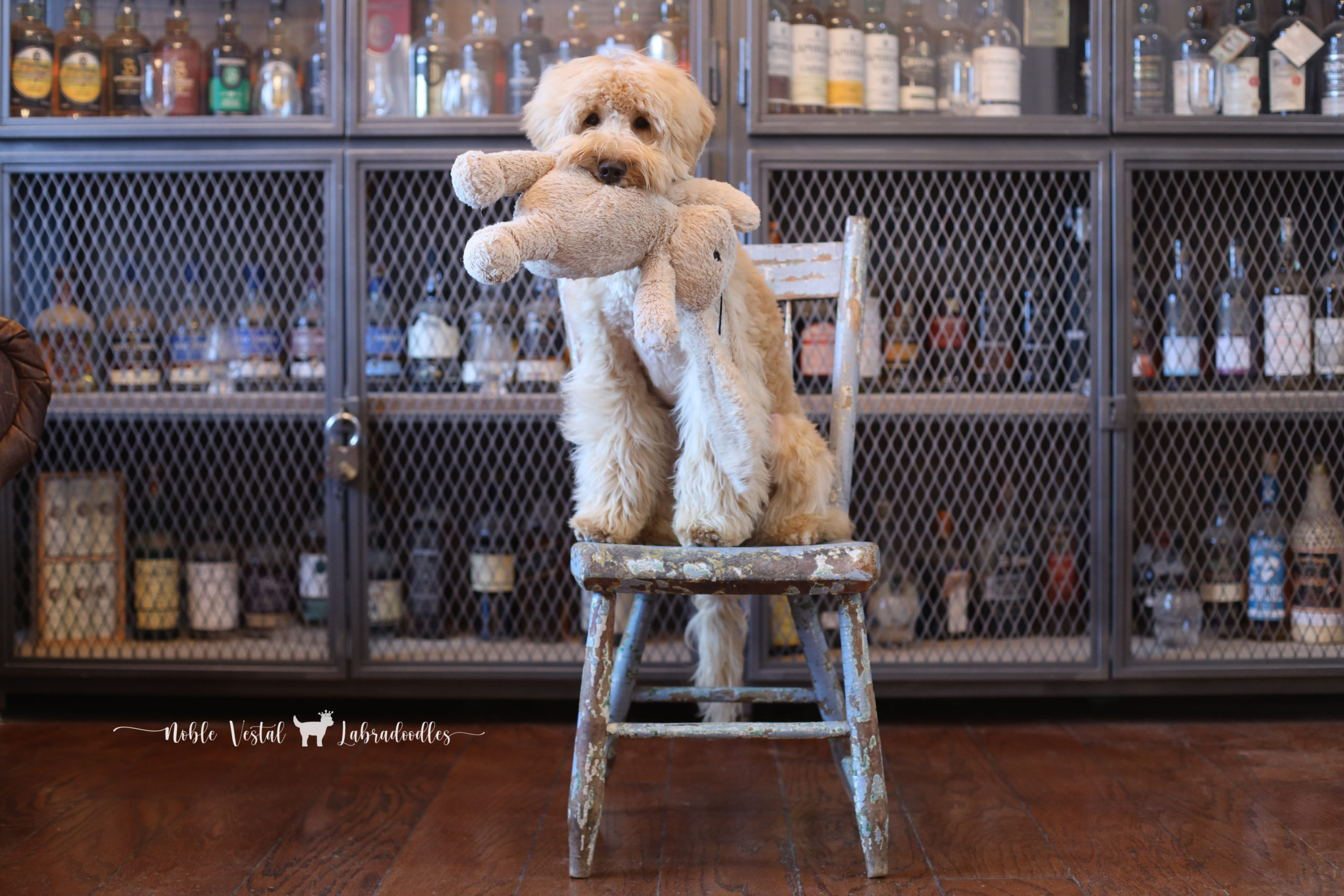 October 1, 2022
The babies are so sweet and silly! It was hard to not just sit and snuggle them instead of doing photos today.  After our photo shoot we did cave and just sat on the floor snuggling these little floofs but honestly we do this all day every day.  They have started eating PawTrees Turkey & Sweet Potato food softened with a gastropro probiotic, salmon oil and joint supplements. We want to insure that the puppies have the best start during rapid growth. They still nurse several times a day. Their day pretty much consists of eating, napping off their food hangover and wrestling with their new toys on repeat all day!

They are right on track.  We have one reservation available!  Don't wait...

September 24, 2022
I love watching puppies grow and develop. It is fascinating to me the mile markers that each litter hits at the same time. It is clear that these developmental markers are very important. It is why we focus on making sure that our puppies are in age-appropriate environments in the right states. Too early and they can become stressed, too late and you miss the critical opportunity to get it right. It is easy for me to spot a puppy that has been raised without proper handling and socialization, or puppies raised without a potty station and in complete isolation.

September 17, 2022
At three weeks of age puppies are able to toddle quite well and are pretty mobile. They have been introduced and have started using a potty station. I love when we add the potty station and they instinctually know what to do! This helps moms keep their area clean and allows us to add plush bedding for the puppies to sleep in. We have continued our biosensor handling. Most of the puppies are so at ease with it that they fall asleep while being handled.  We have added a few plush toys for puppies to start crawling over and exploring. We trim nails every week, this keeps mom from getting scratched and introducing bacteria into her system.

September 10, 2022
The puppies' eyes are just starting to open but they still don't not have full vision and won't even at 8 weeks of age. The puppies can tell by smell if I or someone else has walked into the room. They are moving on their own and actually standing up and taking a few steps.  This week the puppy has continued to be handled daily and received Bio-Senor feedback which helps them build healthy immune systems, improved cardiovascular performance, stronger adrenal glands, more tolerance to stress, and greater resistance to disease. The U.S. Military in their canine program developed a method that still serves as a guide to what works. In an effort to improve the performance of dogs used for military purposes, a program called "Bio Sensor" was developed. Later, it became known to the public as the "Super Dog" Program. Based on years of research, the military learned that early neurological stimulation exercises could have important and lasting effects. Their studies confirmed that there are specific time periods early in life when neurological stimulation has optimum results. The first period involves a window of time that begins on the third day of life and lasts until the sixteenth day. It is believed that because this interval of time is a period of rapid neurological growth and development, and therefore is of great importance to the individual. The "Bio Sensor" program was also concerned with early neurological stimulation in order to give the dog a superior advantage. Its development utilized six exercises, which were designed to stimulate the neurological system. Each workout involved handling puppies once each day. The workouts required handling them one at a time while performing a series of five exercises. Listed in nor order of preference the handler starts with one put and stimulates it using each of the five exercises. The handler completes the series from beginning to end before starting with the next pup. The handling of each pup once per day involves the following exercises:

September 03, 2022
Did you know that dogs are an altricial species they are born before they are fully developed in contrast to precocial species who can stand and walk around within hours of birth?