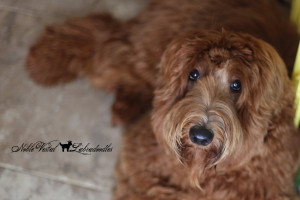 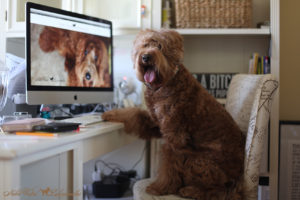 May 13, 2018
With a deep breath and a bit of joy... We have completed our assessments and assignments.Congratulations to each of our families. L-R: Pink Collar Girl, Red Collar Boy, Purple Collar Boy.

Once you know your puppy's name please let me know so that I can update our list.

It has been a beautiful week here and we have played outside in the grass! We have officially walked on hardwood, carpet, concrete, gravel, dirt and grass.

We have started sleeping in crates with a buddy and should be sleeping solo by the time we go home.

We have had our first round of vaccines, nails trimmed, a bath and took a five minute ride in the car this week. Fun stuff preparing to go home... it won't be long... Our final vet visit is this upcoming week and then we will find out who are humans are! Humans please check the calendar of events under Important Dates and be sure you have scheduled your puppy's first vet visit.

April 28, 2018
The puppies have grown and matured so much this week!  They have mastered life, eat like champs, keep their living space clean which makes my life awesome, they love playing with toys and exploring the tunnel, balls and mastered the slide! We are working on Sitting for attention.

April 22, 2018
We took the week a lot slower than usual. It is still hard for me to think about and the picture of just three babies makes it even harder. The puppies are back on solids, back to using their potty station and playing with toys. They are trying to figure out how to navigate the new slide.. do they use the steps or try to go up the slick slide.. it is cute to watch. A video will be coming soon!  They got baths and their nails trimmed this week.

April 14, 2018
First things first. Yes there are only seven puppies in the photos. One has a belly ache and rather than stressing him out to make him sit for pictures today I let him sleep. He has been the smallest from the start and as the puppies have started eating real food this week and everyone else is growing he is not. This is a fate that I dislike. This is all I am going to say about it at this time and ask that you respect that and not to psychoanalyze this 50 different ways. As much as I know you all want to be in the know and be informed but the more emails and phone calls I respond to regarding this the less time I have to care for this puppy. You will have information as it is appropriate and as it applies to our puppies as a whole... sorry.. Back to the pupdate. The puppies have for the most part mastered eating and making a mess in under five minutes! They are using their potty station, learning to navigate their space with toys in it, had their nails trimmed and were introduced to canned venison from Life's Abundance they can't complain and have asked for more! They usually nap belly up after finishing their lunch!

April 07, 2018
I never want to have to imagine a world without puppies.

Gossip's babies have grown and time is flying. The puppies have started using a potty station! This is an important developmental marker and critical to your puppy's future potty training skills. A puppy raised in a clean environment wants to live in a clean environment and potty trains so much easier. The puppies are also starting to checkout Gossip's food but they aren't ready for that yet.

March 30, 2018
The puppies eyes are just now opening but even after they are fully open the puppies still won't have full vision and won't even at 8 weeks of age.  They can tell by smell if I or someone else has walked into the room.  They are moving on their own and actually standing up and taking a few steps.

March 24, 2018
Gossips puppies have grown a tremendous amount this week, with a gain every day. Puppies rely on their mother for warmth, nourishment, protection and stimulations. Right now they sleep, eat and poo and none of those things are done without the aid of their mother.  We started Early Neurologic Stimulation earlier this week and will continue through the next week. I will talk more about this later.