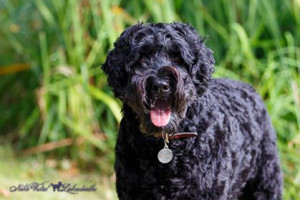 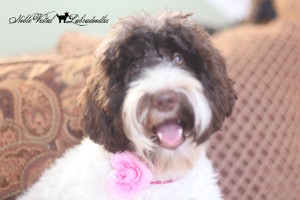 Congratulations to our Sundae puppy families! This is an incredibly sweet litter.

I can't wait to show off these babies again in a few week.. Fun stuff is coming!!

The puppies have their final vet visit in the upcoming week, we will be doing assignments shortly afterward. I will your puppy's name shortly after assignments to start training.  The puppies are currently sleeping in their crates, working on Sits and Come as a group.

Six weeks old and they are so darned cute romping around in the grass. Exploring and discovering new places to play are what Sundae's babies are all about this week!

October 21, 2017
If I had a contest for cutest puppy I think I would be doomed! Serious cuteness going on over here with Sundae's babies.

The puppies eat more than I have ever seen a crew of puppies eat! They are loving their new larger area and big kid toys. They are 99.99% potty trained to their potty station and have started sleeping through the night without their momma.

October 14, 2017
I think Sundae's milk must be laced with Ambien! Seriously, her puppies go to sleep every time I am working with them! At least they are comfortable sleeping anywhere!

They are starting to get teeth and are so cute trying to use them. They have started trying to drag toys around and each other around! They are using their potty station which makes keeping them clean so nice.

October 08, 2017
Sundae's babies are sweet sleepyheads. They have decided that life is about eating real food! We have had to introduce them to softened food a week early to keep them from trying to eat Sundae's food. They mostly eat and sleep at this stage, growing takes a lot of fuel and energy.

September 23, 2017
Sundae's babies are finishing up their first week and are fat and happy babies. They rely on their mother  for warmth, food and constant care to sustain life. The puppies cannot see or hear, their greatest sense is their sense of smell and touch.