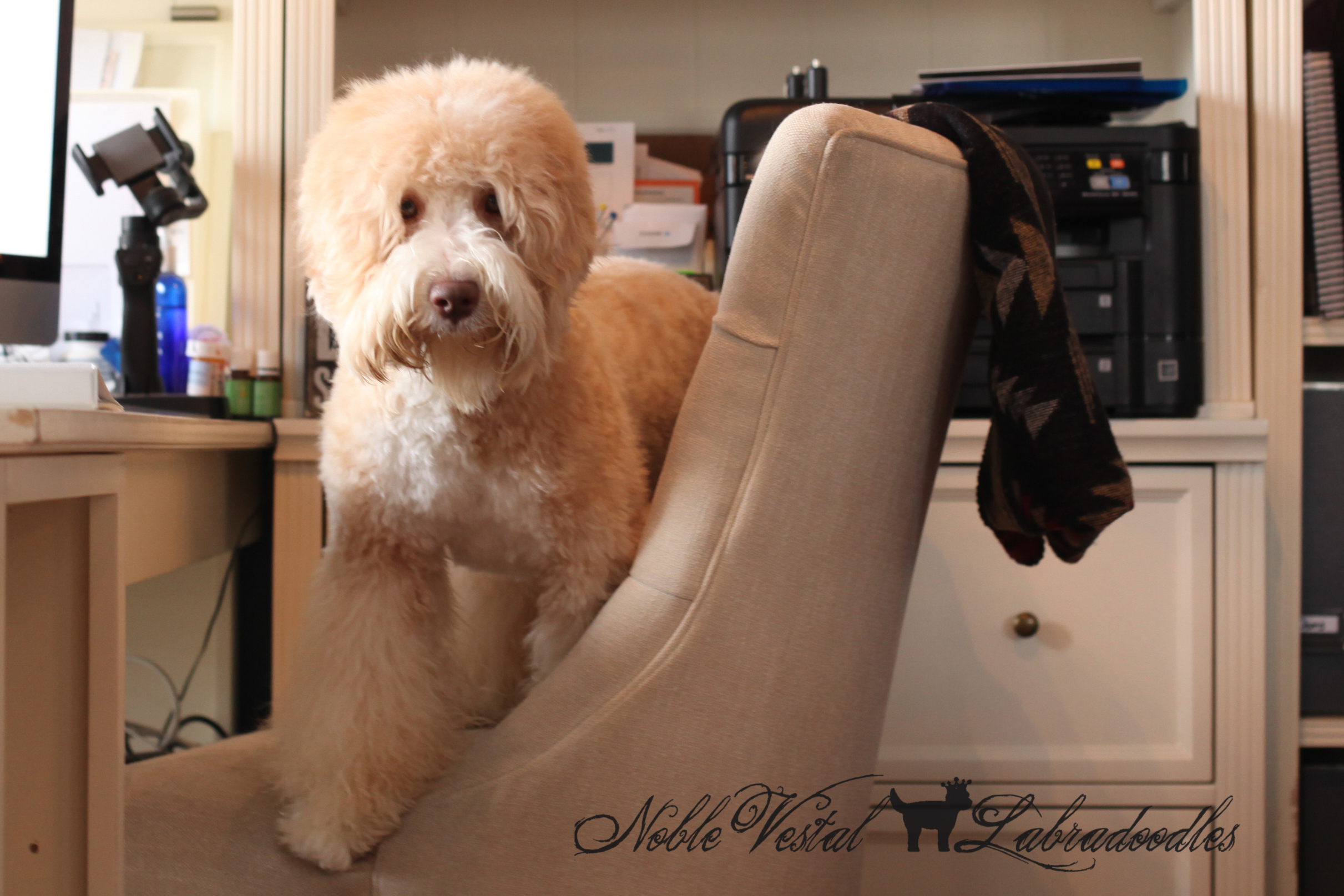 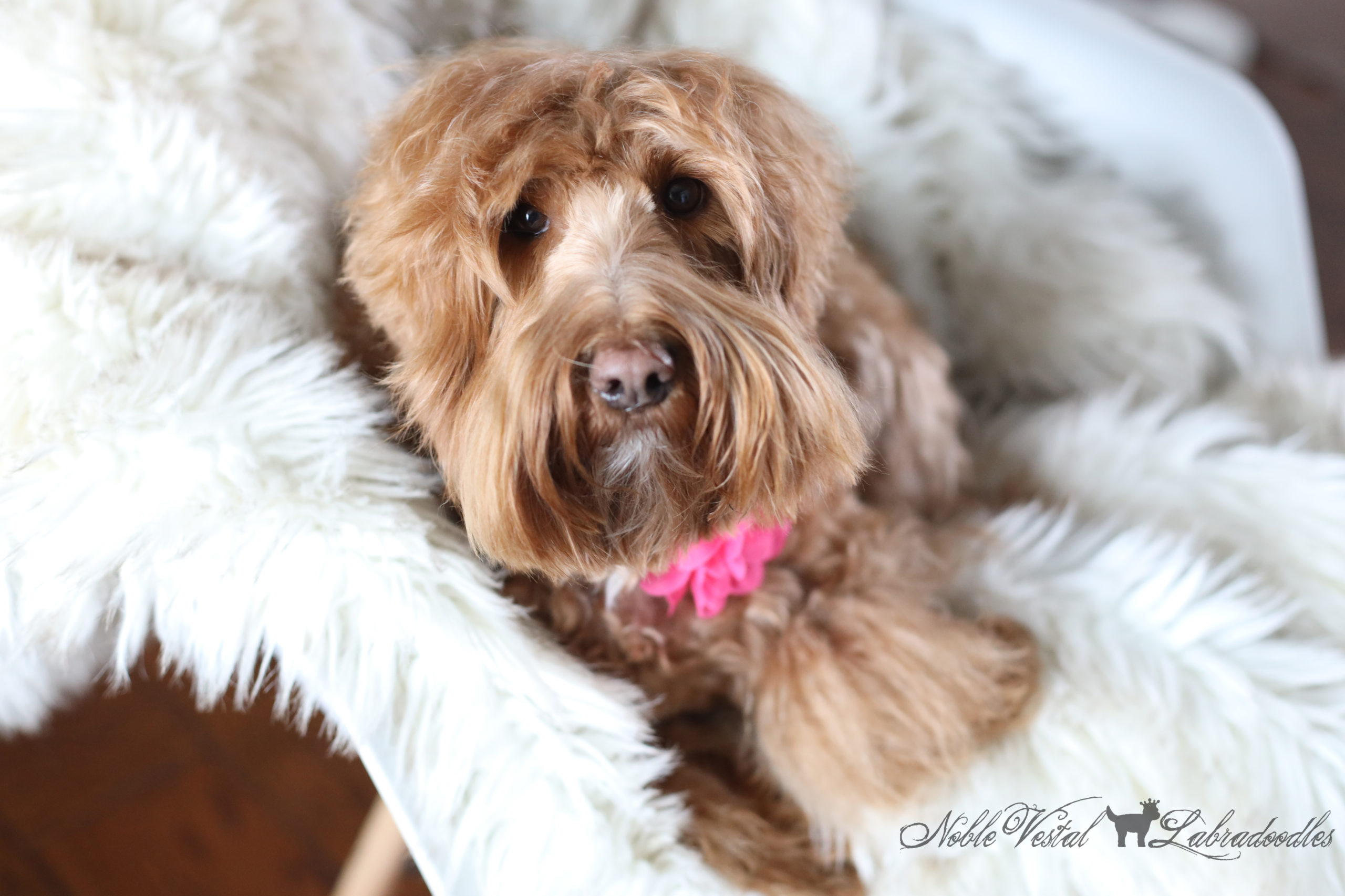 February 21, 2021
It is always such an honor to be able to raise these babies and to hand them over to families. Over the years we have made many close friends who I actually dare refer to as family because of our bond over this beautiful breed.  Today is the same with many of you.The puppies have been photographed in order ever week from left to right: Pink S Girl, Lavender S Girl, Yellow S Girl, Red Boy, Purple Boy, Yellow Boy.
Pink S Girl- NVL Prospect Guardian Home Needed
Lavender S Girl- Wells Family Fishers IN 2nd NVL Puppy!!!
Yellow S Girl- Held for training to be released at a later date
Red Boy- Aglio Family Oviedo FL 2nd NVL Puppy!!!
Purple Boy- Saelinger Family Cincinnati OH 2nd NVL Puppy!!!
Yellow Boy- Murray Family East Hampton NY

I know you are going to love your Bunny puppy and I can't wait to meet you all and see some of you again! Please let me know your puppy's name by Tuesday so that I can finish your puppy's packet. Be sure to finish listening to the Puppy 101 Session online, sign up for Baxter & Bella (use code NOBLE for 25% off) and order all of the things... don't wait to get food ordered... Order food today so that you have it when you get home with your puppy. They eat the Turkey & Sweet potato formula of pawTree You will not find this food at the store and your puppy should eat the same food during the first year of his life while his GI system matures. pawTree's probiotics will help your puppy stay healthy during the stress of the transition. The puppies love all of the toppers too! ABSOLUTELY DO NOT CONTINUE TO WAIT TO ORDER FOOD. DUE TO THE WEATHER THERE HAVE BEEN SHIPPING DELAYS.

There is so much love right here that it is hard to contain. The wiggles and kisses are an absolute delight. Bunny's babies have grown so much! I love watching them play next to my desk during the day. They love the GoDog dinosaurs and dragons because they crinkle and squeak but also make a comfortable pillow after a hard play session. They are taking a mid-afternoon nap in their crates and sleeping through the night too.

February 06, 2021
Bunny's little Foo Foo's are so freaking cute, I can't stand it! They are itty bitty but romp around like they own the world! Put food in front of them and you'd think they were football players preparing for a big game! They love to eat!

January 30, 2021
The puppies have moved to their new playland where they have access to food, water, and interactive toys. This is a big developmental phase as their mothers start to sleep away from them during the night and they start to eat solid foods.
January 23, 2021
I love watching puppies grow and develop. It is fascinating to me the mile markers that each litter hits at the same time. It is clear that these developmental markers are very important. It is why we focus on making sure that our puppies are in age-appropriate environments in the right stages. Too early and they can become stressed, too late and you miss the critical opportunity to get it right. It is easy for me to spot a puppy that has been raised without proper handling and socialization. Puppies raised without a potty station or in complete isolation.
Bunny's puppies are three weeks old and are mastering their potty station and larger puppy space. Bunny is spending about 90% of her day with the puppies but is stepping away to rest and to teach the puppies independence.
January 16, 2021
The puppies' eyes have just opened but they still do not have full vision and won't even at 8 weeks of age.  They can tell by smell if I or someone else has walked into the room.  They are moving on their own and actually standing up and taking a few steps. This week the puppies have continued to be handled daily and received Bio-Senor feedback which helps them build healthy immune systems, improved cardiovascular performance, stronger adrenal glands, more tolerance to stress, and greater resistance to disease. The U.S. Military in their canine program developed a method that still serves as a guide to what works. In an effort to improve the performance of dogs used for military purposes, a program called "Bio Sensor" was developed. Later, it became known to the public as the "Super Dog" Program. Based on years of research, the military learned that early neurological stimulation exercises could have important and lasting effects. Their studies confirmed that there are specific time periods early in life when neurological stimulation has optimum results. The first period involves a window of time that begins on the third day of life and lasts until the sixteenth day. It is believed that because this interval of time is a period of rapid neurological growth and development, and therefore is of great importance to the individual. The "Bio Sensor" program was also concerned with early neurological stimulation in order to give the dog a superior advantage. Its development utilized six exercises, which were designed to stimulate the neurological system. Each workout involved handling puppies once each day. The workouts required handling them one at a time while performing a series of five exercises. Listed in nor order of preference the handler starts with one put and stimulates it using each of the five exercises. The handler completes the series from beginning to end before starting with the next pup. The handling of each pup once per day involves the following exercises:1. Tactile stimulation - Holding the pup in one hand, the handler gently stimulates (tickles) the pup between the toes on any one foot using a Q-tip. It is not necessary to see that the pup is feeling the tickle. Time of stimulation 3 - 5 seconds.2. Head held erect - Using both hands, the pup is held perpendicular to the ground, (straight up), so that its head is directly above its tail. This is an upwards position. Time of stimulation 3 - 5 seconds3. Head pointed down - Holding the pup firmly with both hands the head is reversed and is pointed downward so that it is pointing towards the ground. Time of stimulation 3 - 5 seconds4. Supine position - Hold the pup so that its back is resting in the palm of both hands with its muzzle facing the ceiling. The pup while on its back is allowed to sleep struggle. Time of stimulation 3-5 seconds.5. Thermal stimulation - Use a damp towel that has been cooled in a refrigerator for at least five minutes. Place the pup on the towel, feet down. Do not restrain it from moving. Time of stimulation 3-5 seconds.
January 09, 2021
Bunny's babies are one week old. Did you know that dogs are an altricial species they are born before they are fully developed in contrast to precocial species who can stand and walk around within hours of birth?
Apart from not being able to stand puppies are not yet fully developed. Their eyes and ears are sealed shut to protect them while they continue to develop. It will take a puppy months of development to achieve what other mammals can do shortly after birth.
There is a huge social aspect to this. Precocial species are able to wander off and get lost moments after birth. It is for their protection that they imprint and bond with their mother and distrust and fear everything else. In contrast, altricial species cannot wander off for weeks or even months after birth so they will always be under the protection of their mother. They have a long and flexible social period. It is because of this that humans and dogs are able to bond so closely.