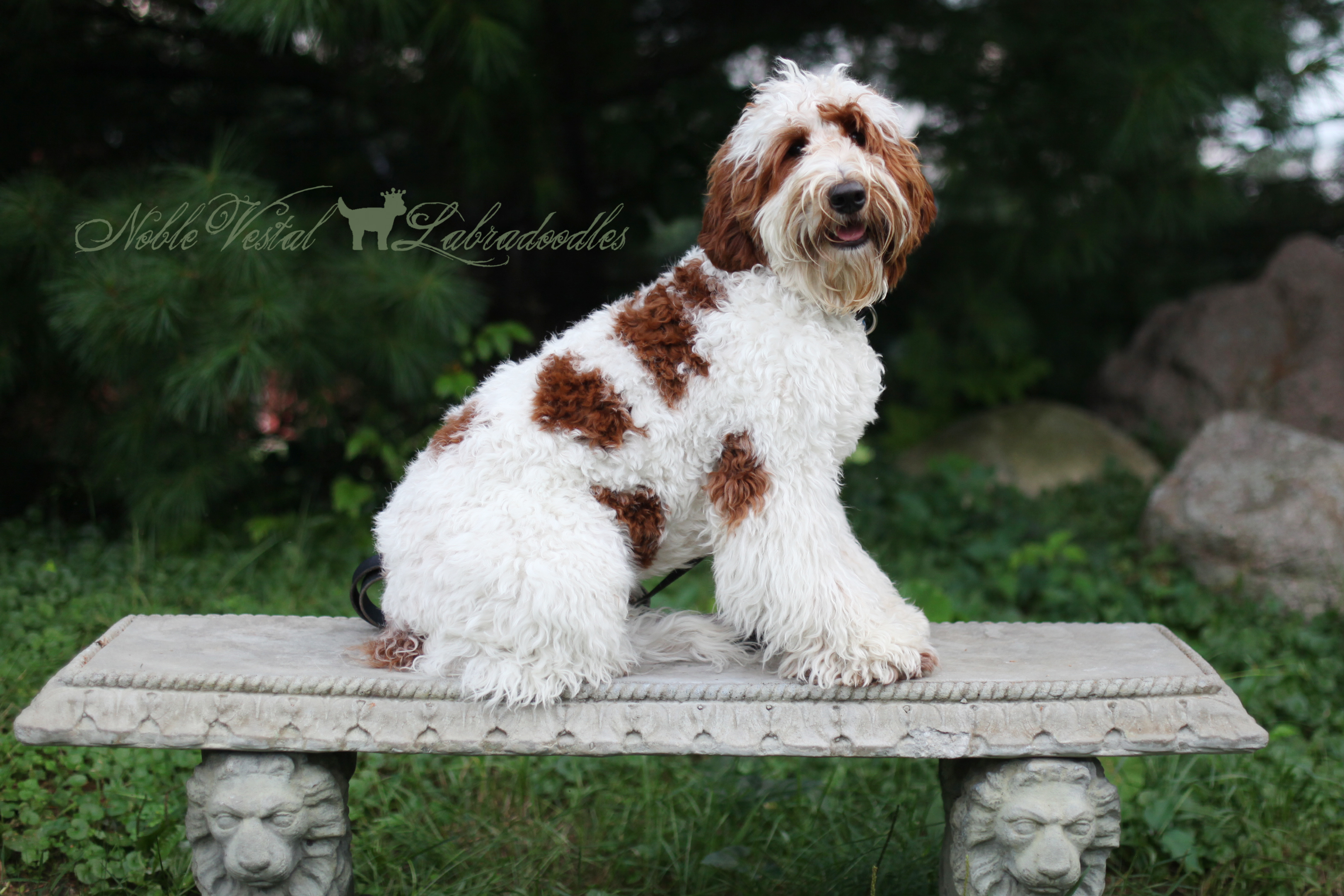 September 24, 2022
It is unreal how much they grow, change and develop in such a short period of time.

Veruca's crew will be off to the vet this coming week for their final evaluation and then we will wrap up evaluations and announce assignments next Sunday evening.

We do have one reservations still open! For details visit the Adopt section of our website.
By now all families on our list should be in the middle of doing their Baxter & Bella preppy homework, have set up their first vet visit, made follow up appointments for their 12 and 16 week boosters, scheduled their first grooming appointment and have their shopping finished. We try to help set you up for success but if you’re not doing the things, I can only caution you that you will be behind when you pick up your puppy.

September 17, 2022
This week in-leu of of a photo we have posted a live video to Facebook. Check Facebook for the live video 🙂

Puppies are eating Pawtree Turkey & Sweet Potato food (select large breed to get the turkey vs chicken) softened with the Gastropro Plus probiotic, salmon oil and joint supplements to support their rapid growth. While many breeders are anxious to remove the momma from puppies at this stage and return them to their guardians, we know how critical it is to allow our puppies to have access to their mother. This is a crucial developmental stage where puppies start to learn play behaviors like bite inhibition. Puppies who are removed from their litter and mother too early often do not learn this skill.

September 10, 2022
I love watching puppies grow and develop. It is fascinating to me the mile markers that each litter hits at the same time. It is clear that these developmental markers are very important. It is why we focus on making sure that our puppies are in age-appropriate environments in the right states. Too early and they can become stressed, too late and you miss the critical opportunity to get it right. It is easy for me to spot a puppy that has been raised without proper handling and socialization. Puppies raised without a potty station or in complete isolation.

They have started eating PawTrees Turkey & Sweet Potato food softened with a gastropro probiotic, salmon oil and joint supplements. We want to insure that the puppies have the best start during rapid growth. They still nurse several times a day. Their day pretty much consists of eating, napping off their food hangover and wrestling with their new toys!

September 03, 2022
The babies are so snoozy... they must be growing. This stage of development is actually known as rapid development. Because they grow so fast during this stage the puppies do sleep more than normal. Did you know that puppies already sleep 90% of the day?! That sounds like a lot but growing takes a lot of energy.  Rue's puppies are right on target developmentally. They are super chunky ♥

August 27, 2022
Their eyes opened earlier this week and like clockwork they started toddling too. There are developmental mile markers that puppies hit as they grow. The first few weeks are marked by puppies who appear to just sleep and eat but in reality the puppies are hitting mile markers in their sleep. It is amazing that their eyes always open just as they gain enough muscle to stand and walk. Follow us weekly to watch them grow!

August 20, 2022
The puppies' eyes are just starting to open but they still don't not have full vision and won't even at 8 weeks of age. The puppies can tell by smell if I or someone else has walked into the room. They are moving on their own and actually standing up and taking a few steps.  This week the puppy has continued to be handled daily and received Bio-Senor feedback which helps them build healthy immune systems, improved cardiovascular performance, stronger adrenal glands, more tolerance to stress, and greater resistance to disease. The U.S. Military in their canine program developed a method that still serves as a guide to what works. In an effort to improve the performance of dogs used for military purposes, a program called "Bio Sensor" was developed. Later, it became known to the public as the "Super Dog" Program. Based on years of research, the military learned that early neurological stimulation exercises could have important and lasting effects. Their studies confirmed that there are specific time periods early in life when neurological stimulation has optimum results. The first period involves a window of time that begins on the third day of life and lasts until the sixteenth day. It is believed that because this interval of time is a period of rapid neurological growth and development, and therefore is of great importance to the individual. The "Bio Sensor" program was also concerned with early neurological stimulation in order to give the dog a superior advantage. Its development utilized six exercises, which were designed to stimulate the neurological system. Each workout involved handling puppies once each day. The workouts required handling them one at a time while performing a series of five exercises. Listed in nor order of preference the handler starts with one put and stimulates it using each of the five exercises. The handler completes the series from beginning to end before starting with the next pup. The handling of each pup once per day involves the following exercises:

August 13, 2022
Did you know that dogs are an altricial species they are born before they are fully developed in contrast to precocial species who can stand and walk around within hours of birth?